Today I went for a walk around Kandy, and found myself strolling up to the British Garrison Cemetery. Now I don’t normally tend to lurk around graveyards, but since the National Museum was closed I thought I’d take a look. It was actually very interesting. As I wandered around the well-kept grounds, I met the afable caretaker, Mr Charles Carmichael, who took time to explain many of the stories behind the inscriptions. 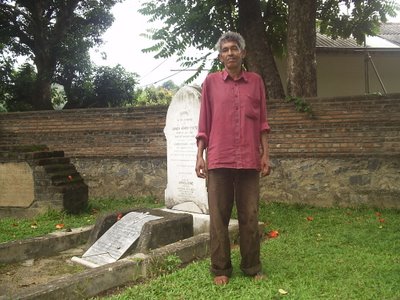 For example, take Captain James McGlashan (1791-1817), who fought with distinction at Basaco, Albuera and Waterloo before turning up in Ceylon. A confident fellow, he made the mistake of walking to Kandy from Trincomalee through the jungle, getting repeatedly soaked in the process and ignoring advice to take shelter from the mosquitoes. As the register states, “He was seized with violent fever and accepted his end with manly fortitude.”

Another is A. McGill (1837-1873) who died in Ambegamuwa from sunstroke. This was unusual since Ambegamuwa is in the hill country; according to Charles, the poor chap ran for seven hours to escape a wild elephant, before dropping dead from exhaustion.

What of young William Mackwood, who died in an accident in 1867, aged just 20? He was supervising the clearing of trees when he leapt from his horse to avoid a falling branch, only to impale himself on a stake left in the ground as a marker.

One thing very noticable about the cemetery is how young most of the people were when they died. Many were in their early twenties, succumbing to malaria, cholera, diarrhoea or jungle fever. I’m glad I’ve had my jabs and that I’ve got access to clean drinking water.

Continuing the slightly maudlin theme, I saw a sign today in the window of the ‘Wine City’ bottle shop, which also – fabulously – trades as ‘Kandy Medical’: