Sorry for the delay folks. Part Two will follow in a few days…

After finalising a few things in Kathmandu it was time for the bus to Dunche, trailhead for the Langtang trek. This entailed an 8 hour bus journey on roads of variable quality (average to horrendous) on a bus that was designed for passengers significantly smaller than clowns like us. There was little to choose between our seats. Option one: the aisle seat, perched next to a vertical steel pole promising mild concussion every time the bus negotiated a pothole (which was often). Option two: the window seat, offering a knee-shattering orgy of pain countered only marginally by jamming one’s legs up to head height and leaning desperately out of the window.

MATT: “I feel like I’m being shaken to pieces.”
PAUL: “I know mate. It’s pretty bad.”
MATT: “Yes, but this is at the molecular level.”

Mercifully, we stopped halfway for lunch at Trisuli. Neither of us were in the mood to eat, being rather hungover after the misguided-but-inevitable piss-up in Kathmandu the night before to herald Matt’s arrival in Nepal. Whoops. The second half of the journey was little better, though the scenery out of the window was spectacular as we made our way along the narrow roads curving around the hillside. Eventually, after what seemed like days, our ordeal was over. Namaste Dunche. Luckily for us, it didn’t take long to find a nice room with fabulous views over the hills from the outside terrace. We asked at our lodge about porter-guides and were introduced to Lobsang, a friendly and enthusiastic Dunche local who had plenty of knowledge about our intended route. A deal was struck. Looking back, we were incredibly lucky: Lobsang was an absolute legend throughout our entire trip.

We had considered the issue of whether or not to carry our own equipment. In the end, the advice of many fellow trekkers – “remember, you’re on holiday” – led us to go for the porter option. No regrets. Despite giving him a load that we would have struggled to shoulder, he actually carried far less than most regular porters, who get loaded with staggering amounts of kit for tour groups: 35-40kg is a typical load. Those guys are amazing.

Before dinner we took a walk around Dunche, accompanied by a 12-year-old local lad called Buddha, who was comfortably the most precocious kid either of us had ever met. In fluent English, he quizzed us on our knowledge of geography, geology, science and sport, whilst casually reciting the heights of Nepal’s major peaks and bemoaning the difficulty he and his mates had finding a level surface to play football. 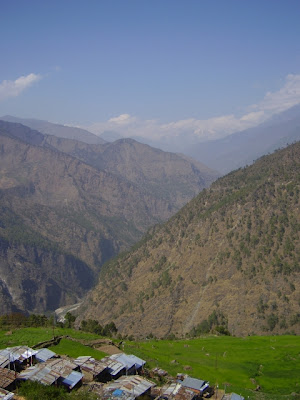 Our first day’s trek was the perfect way to begin. Not too much up, not too much down, and reasonably cool as we followed a good, pleasantly shaded trail along the forested ridge. Lobsang recommended a nice lodge in Thulo Syabru, and we had a hearty dinner of dal bhat, Nepal’s national dish.

MATT (determined): “I’m not going to drink any beer until we get back to Kathmandu.”
MATT: (30 minutes later, rationalising) “Well it is San Miguel.”
PAUL (firm): “Well I’m not going to have any. I don’t feel like it.”
PAUL: (30 minutes after that, resigned) “Oh go on then. Just a small glass.”

The first day had been a breeze, but this was tougher, mainly because after lunch it was uphill all the way. 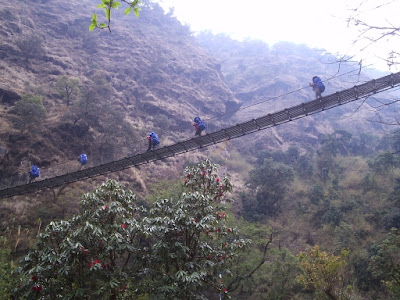 STOPS TO CHECK HIS WATCH

Still, for most of the day we walked along a good path up through the forest. On the way we passed a kind-faced old man taking his grandson for a walk down to Langmoche.

We decided to refer to him as Ganja Grandad after that. But we didn’t take him up on his offer.

Just before we reached Chamdang – a fair walk up, we passed some guys coming down. Fair enough. But unlike regular hikers, these fellows were carrying bikes on their backs. It turns out they were world champion mountain bikers and, insanely, were actually cycling up and down these steep Himalayan paths. Tellingly, they had one porter deputed solely to lug around their enormous medical kit.

Despite his extensive kit list and collection of gadgets, Matt’s watch stops:

MATT: “Hmmm. I should have invested in that wristwatch with built in GPS and altimeter.”
PAUL (glancing at his watch then pointing at handily-placed big yellow sign): “It’s 12.15, we’re at Ghora Tabela and it’s 2900m. Job done.”

On the way up to Langtang Village (a proper settlement as opposed to a collection of lodges) the valley really opens up and there are great views up to the mountains of the Langtang Himal. 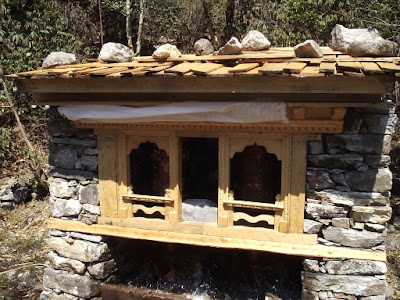 We pass some interesting water-driven Buddhist prayer wheels, before Paul stops to take a photo of a yak. Matt threatens that the yak looks ready to charge. Do yaks charge? Paul looks a little nervous in the photo. 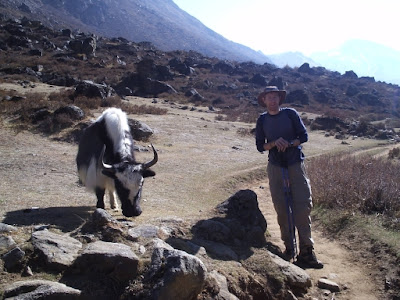 Paul and a yak

At this altitude, it was starting to get a little cold at night.

PAUL: “I think my soap is frozen.”

Matt greets Paul in the morning with a friendly “Happy Birthday” and offers him a cough sweet. For some reason we have a seemingly endless supply.

It was only a half day’s walk up to Kangjin, the furthest (and highest) village up the Langtang valley, so we decided that after checking into a lodge we’d have a crack at climbing the nearby peak of Kangjin Ri (4400m). On balance, Paul decides that yomping around the Nepalese Himalaya is a bloody fine way to spend a birthday.

We still had plenty of energy, but since we weren’t particularly acclimatised it was fairly tough going. Nevertheless, slowly but steadily we made our way to the summit. 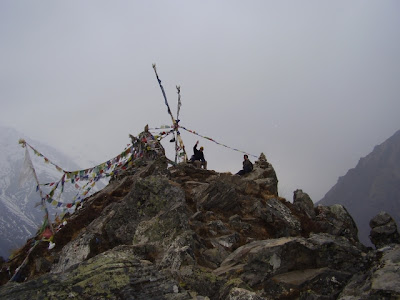 Paul, waving from the top 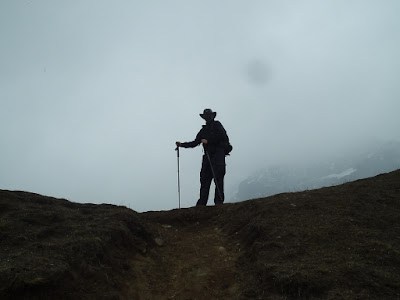 Matt, silhouetted on the ridge

At the top of Kangjin Peak, standing on an exposed ridge:

PAUL: “Shall we carry on to the peak behind?” [Kyimoshung, 4620m]
MATT: “Well, since we’re up here already… Why not?”
Suddenly, the freezing fog closes in and it begins to snow.
MATT & PAUL (simultaneously): “On the other hand…”

That evening it kept on snowing, but it was great to look out from the relative comfort of the lodge dining room. Despite the somewhat unnerving presence of several lycra-clad Frenchmen, it was all quite convivial, especially when we whipped out a small bottle of Indian whisky we’d got poor old Lobsang to carry up from Syabru. It was Paul’s birthday after all.

Paul gets up at 6am to watch the sunrise. Following the heavy snowfall, everything looks stunning in the morning light. While every building blanketed in a white layer, the sun casts wonderful shadows on the valley walls and surrounding peaks of the upper Langtang. This is a tremendous reward for our efforts so far. 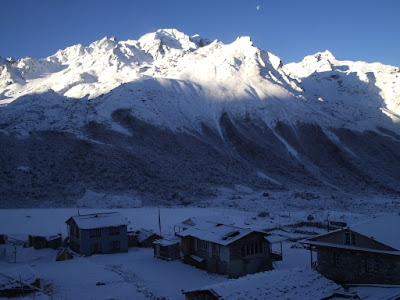 There are no villages past Kangjin with anywhere to stay, so we planned to spend a couple more days exploring the upper valley and acclimatising to the altitude. We considered climbing the nearby Tsergo Ri peak (4983m) but decided to wait another day to see if the snow cleared a little. Instead, we chose to hike further up the valley, as far as Langshisha. Because the valley follows a slight bend, every time you trek a little further you’re rewarded with fresh breathtaking views of the Himalyan range. Towards Langshisha we got a great look at Kangchempo (Tilman’s “fluted peak”) and across to Shishapangma in nearby Tibet.

We also met a group of Austrians planning to establish a base camp on the high altitude pastures there before climbing some mountain or other. Fair play to these alpine types.

Given that this was nominally a rest day in our schedule, we ended up walking for 7 hours – one of the longest days of our trek. The last stretch was the toughest, since we were walking into the wind and the fog had started to move up the valley bringing snow in its wake.

Back in the lodge, the tomato noodle soup tasted damn good.

This was the big one. Ever since the early planning stages of our trek, we’d been looking forward to climbing Tsergo Ri; at just a shade under 5000m, it promised to be a challenge.

We were up early to begin our ascent. With fewer clouds than the day before, conditions looked relatively favourable, despite yet more snowfall overnight. Of course, the mountain looked beautiful, all dusted in white and looming broodily on the north side of the valley. Fortuntately for us, Lobsang had been up before and led the way. We took a long but comparatively gentle route up, winding around the mountain before attempting a steep scramble to the top across virgin snowfields of variable depth. 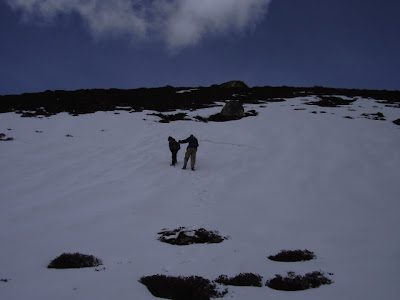 Hilariously described in our guidebooks as a 3-4 hour ascent, it took us 5 hours to reach the summit, partly because of the tricky final assault but mainly due to our general struggle with the altitude. 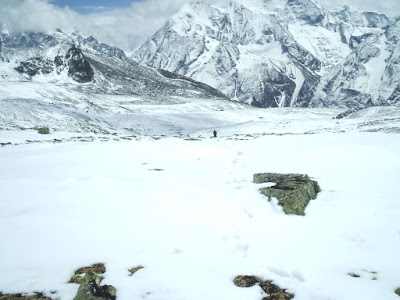 PAUL (having been hanging around on the bitterly cold, exposed summit for ten minutes before Matt joins him): “Right let’s take those bloody photos bloody quick so I get the f*ck down off this f*cker.” 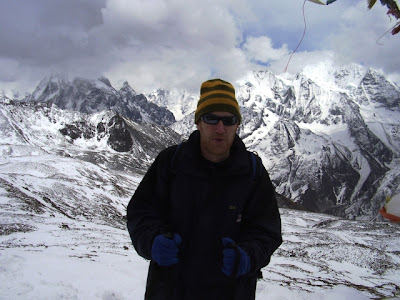 Paul at the summit 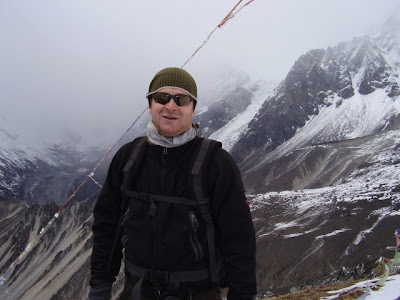 Matt at the summit

Of course, getting to the top was only half the battle. The journey down was a struggle too (Matt’s verdict: “most horrendous descent ever”). We decided not to go back the way we since as it would take far too long. Instead, we had to follow a starkly exposed ridge, cross a sea of boulders and then pick our way along a treacherous, slippery snow-covered trail. It was hard enough before the fog closed in and – inevitably – it started to snow. 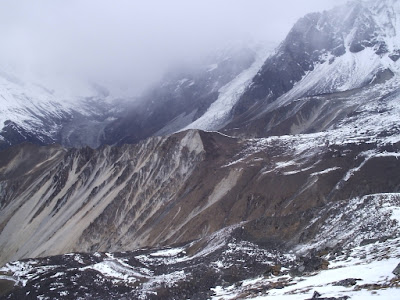 The route back down

On the way down we rechristened the mountain as “Bastard Peak”, or “Mount Bastard”. It was physical. It was tough. But yes, it was satisfying.

Picture the scene: covered in a layer of snow and ice, looking vaguely reminiscent of Shackleton, Oakes and Scott (had they worn fake North Face gear that is), Matt, Paul and Lobsang burst open the door of the lodge dining room in a blizzard of icy wind and billowing sleet. Everyone looks surprised. Almost immediately, three people rise from their seats near the stove and move aside to leave room by the fire. The intrepid mountaineers order an enormous vat of hot lemon and begin to recount stories of their adventure…

Paul’s attempt at cultivating a hard-as-nails, mountain-man image is somewhat undermined (perhaps fatally) by a bad case of windburn, giving him hilarious panda eyes and a permanently shocked expression.

MATT: “Don’t you just love it when you return alive from something bloody dangerous?” 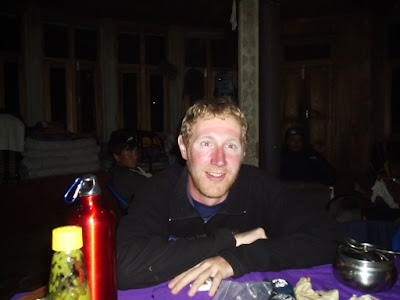 One thought on “Nepal Trek Diary – Part One”