Here’s a still from the Hindi blockbuster Sholay.

Originally released in 1975, the film beacame so popular that some cinemas ran it for years. It remains the most successful Hindi movie of all time. I’ve got the DVD – it’s great.

The plot is relatively straightforward. Small-time criminals Veeru and Jai (played by Dharmendra and living legend Mr Amitabh Bachchan, respectively) are employed by ex-policeman Thakur Baldev Singh (Sanjeev Kumar) to apprehend notorious bandit Gabbar Singh (the excellent Amjad Khan) whose gang has been terrorising the village of Ramgad. There are a couple of twists along the way to keep things lively, but essentially it’s a struggle between good and evil.

The heroes really are heroic. The bad guy really is nasty – in one memorable scene, wiping out the Thakur’s entire family as an act of revenge. In another, he forces Basanti (Hema Malini) to dance on broken glass to save Veeru’s life.

And – importantly for a Bollywood film – the songs are great. Combine all this with action, humour, pathos and romance and you’ve got a winning formula. Certainly, if you spent your hard-earned rupees on seeing this at the cinema you’d definitely walk out having got your money’s worth.

The film owes debt to Sergio Leone’s spaghetti westerns – leading to it being described as a ‘curry western’. Very clever. The landscape (near Bangalore) even looks like the wild west. Of course, a remake is in the pipeline. Sounds like a shameless cash-in to me. But if I’m in the country at the time, I’ll go see it all the same. Bah.

Indian English is here to stay. Rather than just a load of tired linguistic clichés featured in old Two Ronnies sketches and episodes of Mind Your Language, it’s a pukka variant of English, conforming to developed grammatical rules, and is – I would argue – as valid as any other form of the language.

And it’s interesting to see how it works. I suppose Indian English has branched off from 1940s colonial British English, with constant modern inputs from all over the English-speaking world, particularly the USA.

Back in August I found myself giving a talk on British English to the Pune chapter of the Society of Technical Communicators (India). I talked a little bit about regional accents and dialects, but also used examples of American English and Indian English for comparison.

Indian English (not to be confused with Hinglish, which is something else) has many interesting characteristics. Rather than get into a detailed examination of the linguistic complexities – for which I am wildly unqualified – I’ll list a few words and expressions:

Airdash – to fly somewhere urgently, usually in the midst of a crisis
Batchmate – classmate
Eve-teasing – innocent sounding euphemism for sexual harassment
Funda – concept, belief. “He’s got some weird fundas. Like, he wears only purple on Wednesdays.”
Gift – used as a verb; “She gifted me that book for my birthday.”
Godown – warehouse, storage unit or lockup
Item number – song and dance routine in Indian film totally irrelevant to the plot but featuring scantily clad hottie writhing around a lot
Mild lathi charge – when the police decide to go whack people with their big cane sticks
Mishap – horrific accident. “In an unfortunate mishap 49 persons were killed when the bus in which they were travelling plunged headlong off the edge of a 300-foot cliff.”
Pain – used as a verb; “My leg is paining.”
Pass out – to graduate (universal; not used only in the military sense)
Votebank – politicians attempt to cultivate votebanks who they hope will vote for them en masse. These votebanks are often based on caste or religion; really, this is a cynical and divisive approach that fuels social and communal tension. If you ask me.
Timepass – obviously, passing time, but also an activity in itself. Sometimes even a description: “Dhoom 2? It’s a timepass movie.”
VIP – basically any mate of a politician who can blag favours and get free tickets for cricket matches
VVIP – a politician in office. They get to travel round in escorted convoys (if they’re not busy airdashing) and all traffic is halted to allow them through on their way to some jolly or other. They lose touch with reality and tend to believe that they really are the anointed masters of the people, rather than their elected servants. So there.

“The minister airdashed to the godown, scene of the alleged eve-teasing. Police resorted to a mild lathi charge to disperse a crowd of college batchmates, who had gathered for timepass.”

You get the idea.

I got chatting to an autorickshaw driver – a rickshawala – the other day. This isn’t unusual, but normally my non-existent Marathi and their often-limited English restricts us to vague discussions about the cricket or the state of the roads. 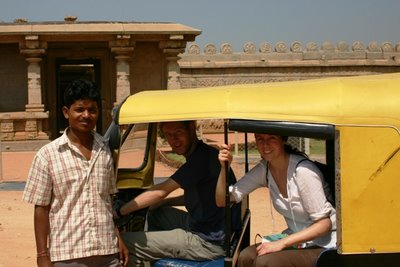 Paul and Rachel in an autorickshaw, Hampi

This particular fellow – Ashok C was his name – spoke better English than me. We had an interesting chat on my journey from Deccan back to Tadiwala Road.

First of all he asked me about religion, and the attitude in Britain towards Muslims. He was concerned about relgious divisions and the resulting violence. “All religions share an ultimate truth. God, Allah. I have Muslim friends, Christian friends, Parsi friends. I myself am a Hindu.”

Next we moved on to politics, and the corruption and mismanagement that mars governance in India – and many other places. “If you have a product, even if the quality is bad, even if it is shoddy, you sell it in the most glowing terms. In the same way, this is how the politicians sell themselves.”

Given that India is a stable democracy, why can’t the rotten politicians get voted out of office? “If you have an honest, educated man and he stands for election, he will never win. Because he does not know how politics works… In the USA they have the right to recall. Perhaps here we will have this in 5-10 years.”

Ashok is actually a Real Estate Agent. He rents out the rickshaw to a driver who pays him Rs60-100 ($1.30 – $2.20) per day. Sometimes the driver doesn’t come, so Ashok drives the rickshaw himself, as happened on this occasion. He says that working an 8-hour day, the driver will make a net profit (after expenses) of around Rs150. For 12hrs, perhaps Rs200-500. Sometimes, this can be boosted a little: hotels pay a commission of Rs250, or taking an industrial supplier around for a day will earn Rs400 plus petrol costs. “It is the easiest way for people to make money with a limited level of education. But even then it is not enough for a family.”

The global pricehike in oil has hit rickshawalas in the pocket. In Pune, the meter rate is around Rs7 per kilometer, although prices haven’t gone up this year. “In the last year, petrol has increased in cost by around 30%. But we have not increased our fares, because then people will not get in the rickshaws. So it is a problem.”

It was a real pleasure to get these insights from Ashok. When I arrived back home, he said farewell. “I can talk to people for hours about these kind of things. But unfotunately my profession does not allow it.”