OK – this picture is from last year. But since we have the technology, let’s use it. Send in your best photo captions and I’ll publish them here. Winner gets a mystery prize… And yes, that is a red saree I’m wearing (albeit unconventionally). Manda seems unimpressed.

Some people have reported problems when posting comments. I’ve now removed the word verification feature so things should be easier now. I really enjoy reading your comments so please keep them coming…

Hello everyone! Welcome to worldofpablo.com…

It’s been a long time coming but I’ve decided to relaunch the website with a new look and new address. I was getting sick of all the spam postings on the old site. Time will tell whether we have any more luck over here…

The new worldofpablo.com is supposed to be more of a blog than an online diary, so I’ll attempt to write shorter, more frequent posts. And with less of a limitation on pictures (the old site supported only ten) it should be more interesting to look at too.

According to my calculations, the last time I posted was in May. I know, I know. Since then I have:

Watched England lose on penalties… again
Topped the class for the Journalism diploma
Begun – and completed – a two month course in Technical Writing from the same department
Attended a one week course in Film Appreciation at the National Film Archives of India
Got soaked in the monsoon rains… repeatedly
Appeared in a least three newspapers (as subject not journalist, hey ho)
Grown a beard…
… and shaved it off again
Been galavanting around Maharashtra with Matt Hinde
Left India for Sri Lanka… temporarily

As usual I’m beginning with an apology for not having posted in ages. The longer I leave it, the more I have to write about, so I put it off for a bit… and the cycle continues. It’s like with emails. Sometimes I receive these fabulous long messages and I don’t have time to reply right away, knowing they deserve a proper response. Then I seem to let them pile up until they become rather intimidating and I suffer from a kind of email paralysis. Hopeless.

One of the reasons I left the UK was because everyone had heard all my anecdotes and I needed to rustle up some new ones. Suffice to say, that hasn’t been a problem.

DGS wise, I somehow found myself writing the script for the new Deep Griha DVD. Hopefully it’ll help with fundraising and awareness building. It was an interesting experience but took several attempts as I had to produce the first draft before I’d even seen the visuals. In fact, there’s been so much going on at DGS recently. For the most part I’ve been a witness rather than being right at the heart of things, but I continue to be amazed by these experiences time and again. There’s been a really good mix of volunteers recently – international and local – who’ve complemented the permanent staff really well. Shazma from Kenya, Laine and Aisha from Canada, Mo and the 2005-06 Link crew from Scotland, Sara and Kate from England, Jane from Canada, Aislinn from Ireland, Paul and Coco from France, all mixed up with lovely locals such as Meeta, Cheryl, Natasha and Sonu. And what with Sharon returning for yet another crack at DGS, it’s been wonderful to interact with so many interesting characters. I’m definitely starting to feel like an old hand, especially when Sharon and I sit around trying to come up with wind-ups for the new batch of Link volunteers. “Wear only purple on Thursdays” is my current favourite. Although I’m arguing that they should address the Volunteer Coordinator as “Oh Captain, my Captain”. 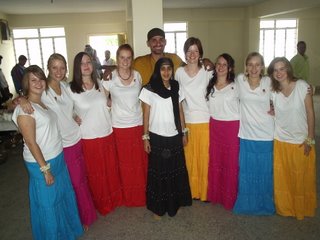 The Deep Griha 31st Birthday Celebrations on July 5th were fabulous. There was a big get-together at the YMCA, and many staff members came up and performed songs and dances. The female volunteers devised a fabulous dance routine to Bollywood smash hit ‘Kajra Re’, which was VERY popular. There was even a memorable encore in a Pune nightclub a few days later…

In the past couple of months, I’ve visited Sahara Aalhad Residential Care and Rehabilitation Centre a few times. It’s a care hospice in Pune for people living with HIV / AIDS, and has developed a close relationship with DISHA (Deep Griha’s Integrated Service for HIV/AIDS). Anyone who goes there will confirm that it’s an extraordinary experience. The dedication of the staff (who often go unpaid due to lack of funds) is enough to restore your faith in humanity. Working in the slums is really less about starvation and disease so much as a lack of education and opportunity. But when you visit Sahara the situation is completely different. People who have been often been abandoned by their families – frequently they’re just dumped there – and have typically only come forward at a very late stage, typically at HIV stage 4 (i.e. clinical AIDS) because of high levels of stigma and discrimination within the community. I’ll post some more about Sahara soon, but please read Hans’ ‘Chaos Within’ posts on the Deep Griha blog – www.deepgriha.blogspot.com – for further insights. Hans has just returned from the XVI International AIDS Conference in Toronto and has some fabulous stories to tell… I’m sure more will emerge in due course. Hans usually leads the English-language awareness sessions but whilst he was away, Mo and I stepped up to the plate and gave a talk about HIV/AIDS to a whole host of international girl guides. It was a new experience for us both but I think we managed to pull it off.

It’s strange. I’m not sure at what point I stopped being a visitor to Pune and at what point I realised I was actually living there… Perhaps it was when I signed the renewed rental agreement for my flat. Either way, my (twice-extended) visa just ran out so I’ve come to Sri Lanka for a month’s holiday / visa run. After obtaining a fresh six-month tourist visa – hopefully a routine procedure – I’ll return to India. I’m not sure yet how much of that I’ll spend in Pune and how much I’ll try and travel around a bit. I’m still very keen on visiting North India, perhaps Himachal Pradesh, Varanasi, and maybe revisiting Amarpurkashi too. After that visa expires it’s time to return to Plan A: hit the road for New Zealand, although perhaps with an illogical but exciting detour via Nepal. Basically by that stage I’ll be properly strapped for cash so will need to start earning as soon as possible. Admittedly I’ve been proceeding a little slower than originally anticipated, but who’s counting?

Monsoon season is upon us again. Last year Tadiwala Road suffered from severe flooding and we had to get cracking with relief operations. There were some exceptionally heavy rains in July but nothing as bad as last year. Nevertheless, many people from all over Maharashtra were displaced from their homes, including many families in Tadiwala Road. Things have eased off for now but there’s always the fear of water-borne diseases such as leptosperosis. Naturally, the roads have all been washed away, making for a spine-shattering experience when negotiating the traffic. An innocuous looking puddle can turn out to be a metre-deep crater, and rocks and gravel seem to be scattered randomly across the roads. It’s interesting to be in Sri Lanka right now, where the climate is quite different. More on that soon.

Back in June the exam results for the Journalism Diploma were released. As luck would have it, I managed to top the class, just scraping a First with Distinction by a few marks. I hadn’t realised that being the class topper was such a big deal here, but it’s been lovely. There’s a tradition in India where you have to buy everyone pehda (a special type of sweet) to celebrate exam success. Let’s just say I never knew I knew so many people in Pune. It cost me a small fortune, but was well worth it. I even ended up in several of the papers – Times of India, Loksatta and Sakal – and consequently have been receiving random congratulations from all over the place, including the watchmen in my building.

It’s actually slightly frustrating because I’m not allowed to work here, which is a shame since I’d like to pick up some more experience.

Since Pune is – after all – the ‘Oxford of the East’, I decided to study a little more and signed up for a two-month Technical Writing course, offered by the same department. Jasmeet and Susham, both fellow diploma students, also took part. I enjoyed it, and somehow found myself agreeing to take a session on ‘British English’ for the Society of Technical Communicators (Pune branch) a couple of weeks back. Random? Yes.

Back in June I also attended an eight day Film Appreciation workshop organised at the National Film Archives of India, based here in Pune. It was great. We got to see some classic movies along with some wonderful short films. I was worried that film appreciation might end up like GCSE English Literature, overanalysing everything until pleasure goes out of it. But it wasn’t like that at all. My favourite session was from a Bollywood screenwriter, who gave us some fascinating insights into how the industry really works. Hmmm have some ideas for the future there…

Matt Hinde came over for 10 days in August – top stuff as he might say. I’ll post a full report soon, photos included. Suffice to say it was a riot. Just never drink ‘Stud’ beer if you can help it.

Thanks to everyone for being so patient. I really hope you’ll enjoy the new blog and would like to encourage you to contribute whenever and however you feel like. It’s very important for me to keep in touch… a very dear friend recently said that sometimes I was often more like a character in some faraway legend rather than a real person these days, so I’ll endeavour to keep you posted with my comedy antics…

Love to all, Paul xx