An experiment using OpenHeatMap. I’m interested to see how this looks…

Please note that the boundaries on these maps are neither purported to be correct nor authentic by Survey of India directives. Just in case you needed to know that…

Just an old-but-gold photo from this year’s Holi – the ‘Festival of Colours’. 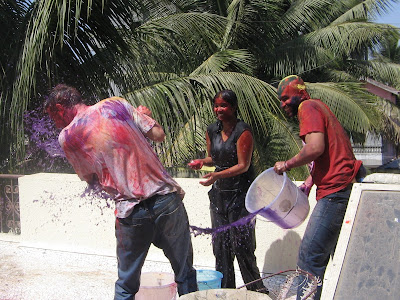 ‘Playing Holi’ generally involves getting as many people soaked with water and covered in powder paint as possible. These days you can get herbal colours if you look hard enough, but there’s no guarantee that everyone else isn’t using products designed for industrial use only. It’s then quite an effort to get all the paint off afterwards, but it’s all part of the fun.

Look closely at this picture. I’m copping a bucket from Hans as Ashlu looks on. Ho ho. But wait! What’s that in his back pocket? The sly rascal has a backup supply!

I will get my revenge next year.

I know it’s been a long time. For many of you, I’m sure it appears I’ve dropped completely off the radar. Usually, I begin my postings with some kind of apology, citing time constraints as the reason why I haven’t updated the site in so long. Or replied to the ever-growing pile of emails in my inbox, for that matter. And if it ain’t broke, why fix it, right?

So yes, I have been busy. First of all, the usual excitement at Deep Griha. There’s never a dull moment at that place, and I’ve been getting involved in various projects, helping out where I can. At times it’s been hard work, but I’m learning constantly and soaking it all up.

Back in December, I submitted a proposal for Deep Griha to Commonwealth Connects (a pan-Commonwealth development initiative focused on information communication technology). The proposal was entitled ‘ICT skills training for urban slum communities in Pune, India’ and for a couple of months I kind of forgot about it. Then, out of nowhere, I received an email inviting me to present the proposal at the Commonwealth Connects 2007 conference, to be held in New Delhi on 23-24 March. It’s always nice to receive some positive feedback and since I don’t have any formal training in development issues it’s good to know that the proposals I write are generally along the right lines.

The only hitch was that the conference was scheduled for a week after my visa expired. But things can sometimes be arranged…

My plan was simple: head up to Delhi a few days early, procure a 14-day visa extension from the Ministry of Home Affairs, attend the conference, then overland it to Nepal. As luck would have it, my old buddy Matt was making plans to trek in Nepal around the same time. Bingo – we’ll team up. After a few weeks clowning around the Himalaya, return to India on a fresh visa. Job done.
Of course, it didn’t work out that way. The MHA didn’t like the sound of me attending a conference on a tourist visa, not least one organised by a commercial sounding name like the Commonwealth Business Council. The fact that the event was co-sponsored by the Government of India, the keynote speaker was President Kalam and that a load of ministers and officials would be in attendance didn’t make any difference. The problem is that tourist visas are (ostensibly) non-extendable, and can’t be converted to any other kind of visa – such as a conference visa for example.

My old Pune University batchmate Jasmeet had met me outside the visa office. He’s a Delhi local (Dilliwala?), and as he rightly pointed out, “You don’t know how the system works.” We quickly embarked on a whistlestop tour of various government departments in an attempt to get the necessarily clearance. Jasmeet showed exactly the right kind of dogged persistence combined with infinite patience which seems to be the way to go about these things. I just played the role of ‘bemused foreigner’, a part I was born to play. At one stage, we managed to get as far as some junior undersecretary in the right department, but by then it was getting late. “It’s 3 o’clock on a Friday afternoon, and your visa expires on Sunday. It would be very difficult to get much done in time,” he told us.

So that was that. I was left in somewhat of a dilemma, because with my visa expiring in just two days I had to leave the country sharpish. I did have a train booked from Delhi up to near the Nepalese border, but of course that was scheduled for after the conference. There’s a long waiting list for tickets so getting something the next day would have been impossible. We enquired at a respectable-looking travel agency in Connaught Place about flights to Kathmandu, leaving in the next couple of days.

Everything was booked out, on all airlines. Not good.

What about Colombo, Sri Lanka? (Always a good backup.) Nope. Nothing available at short notice. Okay… getting desperate here… what about Bangkok? Possible. But only a one-way ticket, because my visa was about to expire. What’s that got to do with the agent? That’s my problem, I protested; I’d get a new Indian visa once I arrived. Nothing doing. I pointed out that last time I booked a ticket to Bangkok the agent refused to sell me a single ticket, due to non-existent (or at least, non-enforced) Thai regulations. That’s why I ended up thinking about returning to India to study (lucky for me, as it turned out). This time, I wanted a return ticket, and they’d only sell me a one-way passage out of the country. Shi baba.

“What we need,” I said to Jasmeet, “Is a proper Indian travel agent. You know, some guy with a telephone.”

It didn’t take long. We passed a bureau de change and Jasmeet asked the man inside about travel agencies, and lo and behold he led us to exactly the kind of place we were after: guy with phone. Within half an hour, I had a flight booked to Kathmandu, leaving the next day.

So here I am. The plan is to kick around for a couple of weeks until Matt arrives, then hit the trail. I’m here earlier than scheduled, but that’s not the end of the world. First impressions are good and I’m looking forward to exploring the Kathmandu valley over the next few days. Watch this space…

I think these are an Indian phenomenon… At least, I’ve never encountered them anywhere else. So what is a missed call? Basically, it’s a quick and handy way of saving a few rupees on phone calls or text messages. You dial a number, let it ring once, and hang up. Simple.

Deceptively simple perhaps. Depending on the circumstances, missed calls may have many different meanings. These include:

– “I’m thinking of you. How’s it going?”
– “Yes. I agree” or “Ha. Very funny” [probably with the contents of a recently received SMS]
– “Yep. Will see you there”
– “Where are you? I’ve been waiting here for bloody ages”
– “Did you get my last message?”
– “I’m waiting right outside. Come meet me”
– “Call me back – I’m out of phone credit” [Hans uses this method on principle]
– “The lecturer has arrived. Leave the canteen and come to class”

Usually, the context will be fairly clear, having been agreed beforehand, for example, “Give me a missed call when you’re about to reach and I’ll meet you there,” or something of that nature.

After a couple of years here I’m beginning to get the hang of them. So if you ever get a one-ringer from my cell number, you’ll have to work out exactly what it means.

At last the elections are over. In our ward, Shakuntala finished behind the Congress candidate, who was re-elected.

India is proud to be the world’s largest democracy. And these local elections are taken seriously, especially in economically deprived areas like Tadiwala Road. While allegations of malpractice surface from time to time, the elections are generally expected to be ‘free and fair’. And despite dodgy voter inducements such as illegal cash payments, or even bizarre supposedly legal ‘incentive’ schemes, people generally accept the results once they have been announced.

The Congress party workers were certainly celebrating. They set up some huge loudspeakers and partied away with dancing, fireworks, paint-throwing and all that tamasha. I spotted a vehicle pulling up just near to the DGS office. Out jumped a couple of Congress workers, who soon unloaded bottles of Kingfisher Strong beer (‘strong is wrong’ – I know from painful experience) and several pegs of whisky. Time for a party. They must have spent a fair few rupees on hiring those speakers; the monotonous pounding music was driving us nuts. And then suddenly, it stopped.

It turns out that a fight had broken out. A few hooligans were chasing each other up the road wielding big sticks. Hence no more music. Things are back to normal now, and Tadiwala Road has reverted to its regular status of what I’d call ‘chaotic harmony’… There’s rarely a dull moment around here.